HOME
Doyle Tatum's Log Cabin blog post
Professor Pierce ("PL") Elkins was awarded a $75.00 prize for his forestry presentation. With the money, he proposed letting the Future Farmers of America (FFA) students build a log cabin on the site of old Milton High School. The Cabin was built during the 1934-1935 school year and is one of only two remaining FFA-constructed log cabins still in use today in the United States.
The Cabin was a hands-on project that involved the entire community. Alpharetta merchants contributed needed supplies to help complete the project. The students cut and hauled donated pine trees to the Cabin site. The foundation was laid using rocks provided by farmers and cement supplied by local merchants. The Cabin was originally an FFA clubhouse and also served as a central meeting place for the community for meetings, dances, parties, weddings and suppers.  The only construction help the FFA boys received was in building the chimney.  Almost all these boys grew up and were part of the "Greatest Generation" who served our country in WWII.  Only two of the FFA members who built the log cabin survive until restoration was started in 2017, George Jones and John Marvin Dorris; both in their late ninties died before the completion.  In addition Billy Bates, old Milton County unofficial historian, who built the well house and other outbuildings at the log cabin site survived until 2021, but died before the open house October 16, 2021.
The Fulton County School System has built a beautiful new STEM high school on the site of the Old Milton County High School.  Initial plans for the new school called for the FFA Log Cabin  to be demolished and removed from the site.  When School Board members were made aware of the community's love of this very special structure, the Board agreed to relinquish ownership of the Cabin to the City of Alpharetta if the City would agree to relocate the Log Cabin and clear the site by December 31, 2017.

In June, 2017, an agreement between the Fulton County Schools and the City of Alpharetta was finalized.  The City agreed to provide land for the Cabin in park property at 210 Milton Ave that was previous home of Carrol and Louise Beavers, both long time teachers at old Milton.  Alpharetta also contributed $50,000 toward its relocation.  The Alpharetta Convention and Visitors Bureau also contributed $15,000 toward the project.  The Alpharetta and Old Milton County Historical Society agreed to raise the additional funding needed to move and restore the log cabin, to assume management of the relocation project, and to manage all future uses of the cabin.

Jim Spruell, a retire System engineer and Treasurer of the Historical Society, volunteered to serve as project manager.  Jim recruited Jack Morton, retired owner of Morton Construction Company, to serve as General Contractor at no cost.  Jim and Jack are first cousins and both are Milton High alumni.  Their common uncle Felton Spruell was one of the Milton High students who constructed the Log Cabin back in the 1930s.  Jack with his Morton Construction Company built many houses and businesses in Alpharetta area since 1965, so Jack was able to find several subcontractors who were fellow Milton alumni, that agreed to work on the project at reduced rates.  Architect Tracy Ward agreed to provide his services at  reduced rate.  However Jack did not survive cancer operation in 2020 and his son Ken Morton, president of Morton Construction Company, continued to help Jim complete the project.

Just as our community came together in the 1930s to help the FFA students construct the Log Cabin, it once again came together to save it.  Thanks are due the City of Alpharetta, the Alpharetta Convention and Visitors Bureau, the officers and members of the Alpharetta and Old Milton County Historical Society who lobbied the School Board and the City, Councilman Donald Mitchell who served as a liaison between the City Council and the Historical Society, the members of the construction team, and the many individual donors without whom the Log Cabin could not have been saved.

By October 1, 2017, the Alpharetta and Old Milton County Historical Society (AOMCHS) had raised $162,000 (including the funds from the City and the Convention and Visitors Bureau.).  This amount was sufficient to move the Cabin, but is not enough to complete its restoration.

On Saturday, October 14, 2017 our community watched and cheered as the FFA Log Cabin left the grounds of the old Milton High School where it had set for more than 80 years, and rolled down Milton Avenue to its new location.  Our beloved Log Cabin is saved, but much remains to be done.

The Historical Society required $360,000 to complete the Log Cabin and all these funds have now been received and the Log Cabin with added kitchen, 2 restrooms, was finished in the spring of  2021.  We have turned the Log Cabin into a facility that will be used for events and educational sessions like the ones that have been held in the facility for the last 84 years.  Several kids camps, Milton Class reunions, family reunions, AOMCHS meetings, and Arts & Craft meeting have already been held in the Log Cabin.  A film maker has also rented the cabin to film some movie sections.    A full basement was added and it is still being setup as an area to store and display AOMCHS archives that were not put in the Museum in Alpharetta's city hall.

Log Cabin was to be destroyed but will be saved
George Jones (age 97) was the only remaining FFA student builders with members of Cambridge High School FFA at open house in 2017.
John Marvin Dorris (age 99) other remaining FFA Student builder until his death 7-19-2018, one month prior to his 100th birhday
Log cabin front east view 11-20-18
Log cabin Milton Ave view
11-8-18
New fireplace 10-27-18 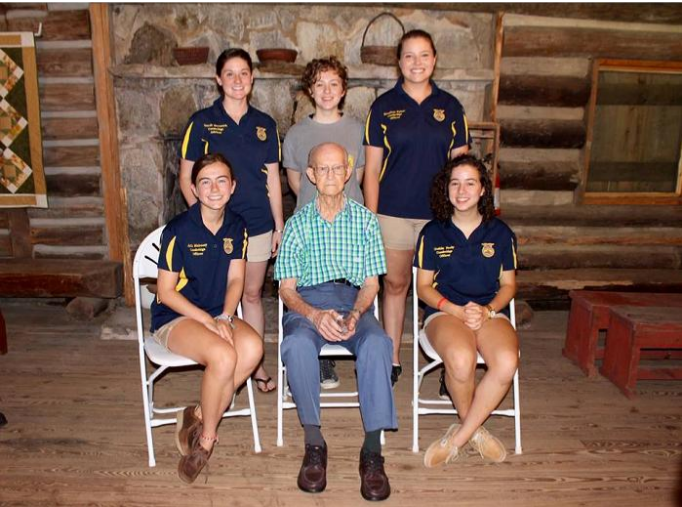 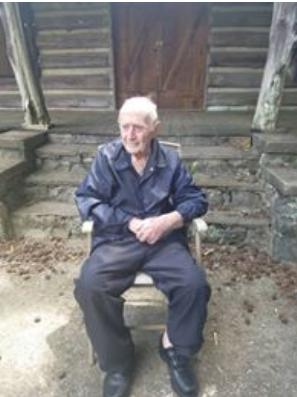 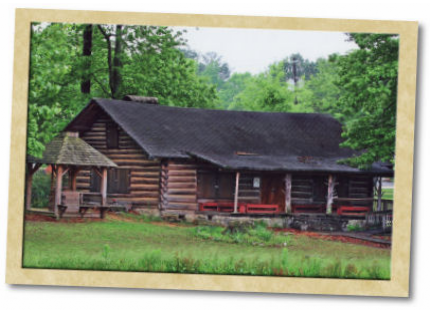 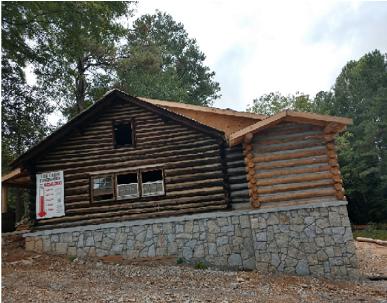 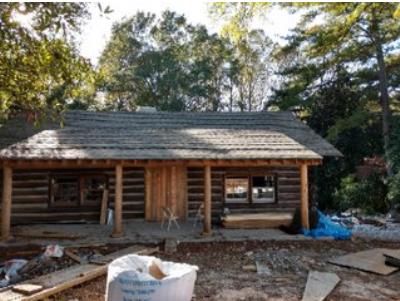 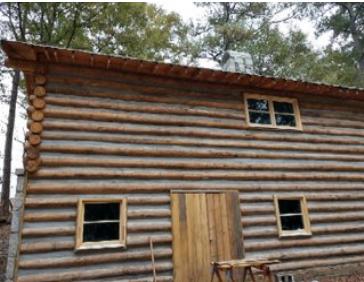